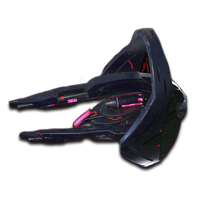 Special Prometheus Laser increases damage against Blacklight aliens x3.5
Special A-BL Ammo increases damage against Invoke x8
This mothership is so huge that it is unable to move. To compensate, it has an extremely large attack range (currently the largest in the game).
Mindfire Behemoth is a group of independent NPCs. If you deal enough damage to them, you will receive a chest containing Rinusk, Blacklight Trace and Mindfire Cerebrum. The more damage you deal, the better the chest you will get. (Possible 8 chests with the same content)
Additionally, 45,000 Uridium and 180,000,000 Credits are split among chest, dropped by this alien.

Behemot Abilities:
Slow projectiles (Active) – Shoots projectiles which slow ships targeted similar to the Saboteurs. However, there is no limit on cooldown times.
Shock Wave (Active Automatic)– Creates a + or – on each pilot, when getting too close it will deal damage while healing the Mindfire Behemoth.
Shock Wave Permanent Anti-Cloak (Passive) – Immediately removes cloaked pilots nearby.
Multiple targets (Active Automatic) – The Mindfire Behemoth can target any target it wishes and more than one at any given time when have critical health.